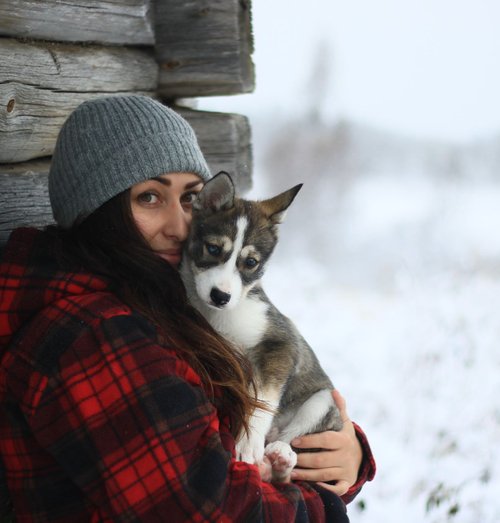 IN I NORDEN is a small tourism company located in Österåsen/Strömsund, Sweden. The company is owned and founded by Nicole Fhors, who also runs the RAXEIRA sleddog kennel on site. The company, then named only Raxeira's, was earlier located in Glöte/Lofsdalen, but moved to Strömsund and developed into IN I NORDEN during the year of 2020-21.

IN I NORDEN offers personal and authentic outdoor experiences, partly together with their Siberian Huskies during winter, summer and fall. The company focuses on experiences where the emphasis is put on connecting with the dogs and nature through a very hands-on experience, while also educating guests about sleddogs and the lifestyle of the Scandinavian north.

Born in 1987 and raised in the small municipality of Karlsborg, close to the mythical nature preserves of Tiveden in the midwest of Sweden, animals and nature have always had a very central role in her life. She left her hometown and family home at the age of 15 to study, to then spend a few years on the Balearic Islands of Spain working as a resort entertainer for Hi!Hotels. After a brief stopover in London, she eventually ended up in Stockholm to study the teachers programme at the University of Stockholm and personal training at PT School. Being notoriously curious about all that life has to offer, Nicole has tried many different career paths in many different lines of businesses - but she always had a deep yearning to create something of her own and build a life-design that aligned with her values.

In the beginning of 2013 she got into the sport and lifestyle of mushing with dogs when getting her first husky. Since then, the huskies belong to her greatest passions in life. Many of her family and friends were amused and confused when the sun-loving girl who dreaded cold winters, declared that she had decided to move to the north of Sweden in order to pursue her dreams of a quieter life, closer to nature with her huskies.

Besides her love for animals, Nicole is also very passionate about painting, writing, music and creative arts of all forms. When she is not running IN I NORDEN she devotes herself artistry and writing, taking on freelance jobs. During the years of 2018-2020 she has also been a fulltime student at Leksands Folkhögskola, studying Creative Entrepreneurship alongside developing and running her RAXEIRA's/ IN I NORDEN.

TAKE ME TO THE ACTIVITES

Copyright by IN I NORDEN © All rights reserved 2021